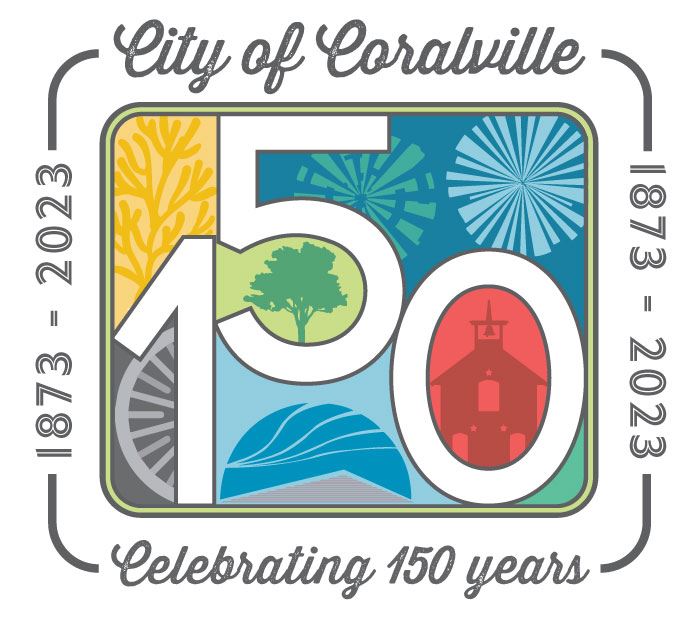 Rich History. Bright Future.
Celebrating 150 Years
On October 3, 1873, Coralville officially became incorporated as a town in Johnson County, Iowa. From October 2022 through October 2023, Coralville will be marking our sesquicentennial (our 150th anniversary) to honor our past, celebrate the present, and look toward the future.

To commemorate this historic milestone, we'll roll out free, special celebrations over the next year to help mark 150 years, including:

Join us as we celebrate 150 years of community in Coralville!

Coralville Apparel
Order Online By November 28 at 9:00 am
Place an online order to be mailed directly to you. The online store closes at 9:00 am on Monday, November 28. The estimated order completion date is December 21, 2022. 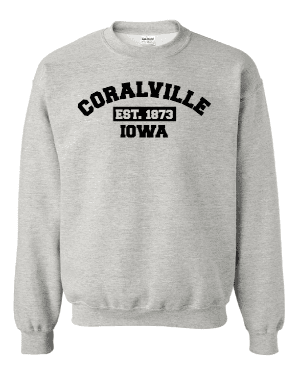 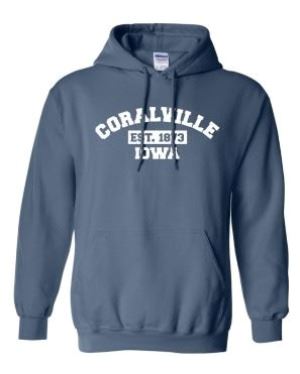 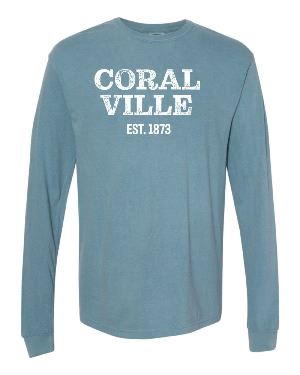 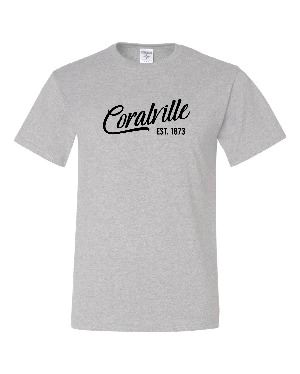 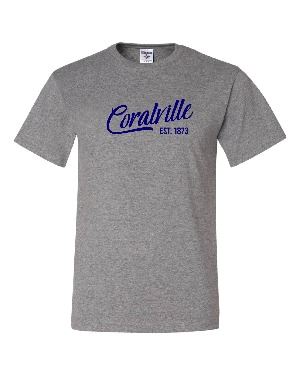 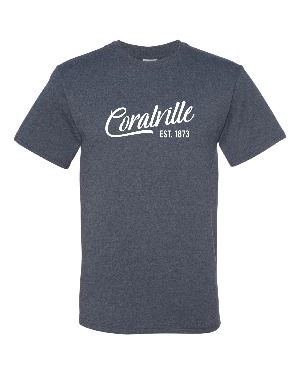 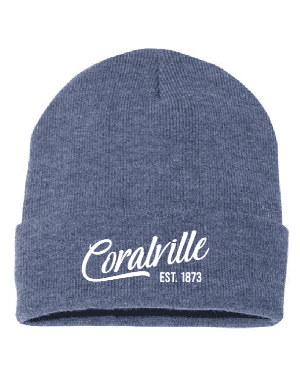 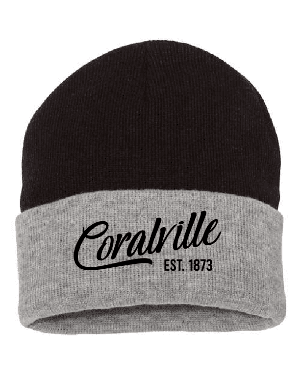 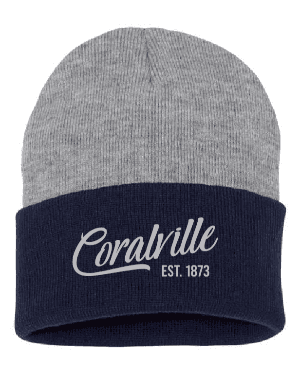 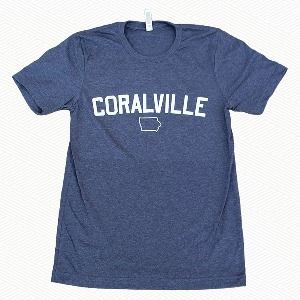 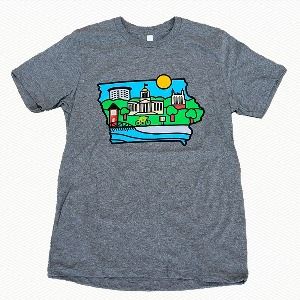 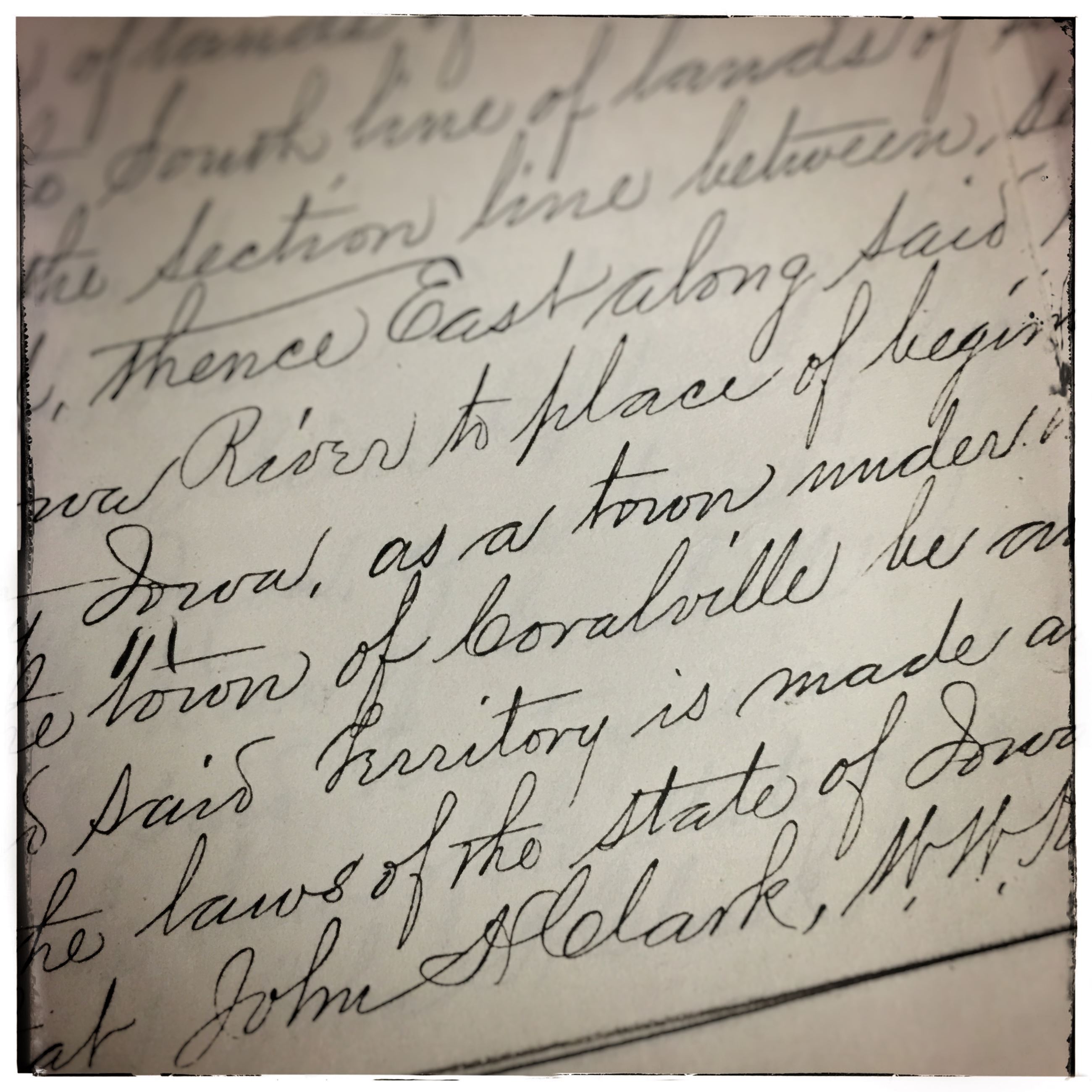 Volunteer
Community participation makes every great event possible! We'll have opportunities throughout the year to assist with events for a variety of skills and abilities.
Sign up to volunteer

Who to Contact
We welcome your questions, ideas, and comments! 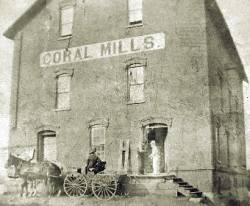 Mid-1800s: The development of Coralville began after the construction in 1843 of what was then the largest dam in Iowa along the Iowa River, and the mills that used the dam’s power. In the early days, the small settlement was known as "Clarksville."

Namesake: The town was christened "Coralville" in 1866 after Louis Agassiz, a Harvard zoologist, spoke at the University of Iowa about the samples of fossilized coral that he found in the limestone around the mills along the Iowa River. Local merchant Ezekial Clark renamed his mill to "Coral Mills," and the small town became known as Coralville.

1873 to World War II: By the time of its incorporation in 1873, Coralville’s population had grown to almost 300. It boasted a blacksmith shop, wagon shop, meat market, lumberyard, dry good store, and four saloons. The Coralville Schoolhouse was built in 1876 on 5th Street, and Old Town Hall was erected on 2nd Avenue in the late 1880s (it was later moved twice). Both the 1876 Schoolhouse and Old Town Hall still stand today on 5th Street.

By 1900, the mills closed and the Iowa City Electric Company had acquired all the waterpower of the dam. Coralville’s economy was so dependent on the mills that their closing spelled decline for the little town.

Coralville began to grow again in the late 1920s and boomed after World War II. Coralville was an attractive place to live because of its inexpensive housing, lower taxes, and proximity to the University campus.

1940s & 1950s: The population of Coralville grew from 433 in 1940, to 977 in 1950. Automobile travel and tourism became common, and the "Coralville Strip" became well-populated with retail shops, service stations, discount stores, restaurants, and motels.

During the same period, the Coralville Dam was built four miles upstream from the city. Authorized in 1938 by Congress, begun in 1949, and completed in 1958 by the US Corps of Engineers, it has prevented serious flooding except for the exceptional years of 1993 and 2008.

Commercial and housing development continued throughout the second half of the 20th century, along with growth in city services. The former power station, which had been shut down in 1968, reopened in 1972 as a riverside restaurant. Coralville's 4th of July festival, 4thFest, began in 1983.

1990s: By the 1990s, Highway 6, known as "the strip," was ready for a makeover, complete with decorative street lighting and plantings. A city center was developed around the city campus and former post office.

In 1996, work began on Coral Ridge Mall, the state’s second-largest indoor shopping center, at the intersection of Interstate 80 and Highways 6 and 965.

Late 1990s to Present: In the late 1990s, local visionaries began efforts to revitalize an industrial park along the Iowa River and Interstate 80. This launched over 30 years of work with the EPA to transform the area from brownfields into the vibrant community gateway, known today as the Iowa River Landing.

In 2008, Coralville experienced historic flooding. Over 200 businesses and more than 400 households were directly impacted, and the City's infrastructure sustained over $7 million in damages. The City swiftly put together a comprehensive flood mitigation plan with permanent and removable flood walls, earthen berms, raising streets and bridges, storm sewer and stormwater pump station improvements, and raising and fortifying a railroad embankment. By 2018, it had completed permanent mitigation measures to protect low-lying areas surrounding Biscuit Creek, Clear Creek, and the Iowa River to a level of one foot above the 2008 flood levels.

As of the 2020 Census, Coralville’s population reached 22,318. Coralville is one of the top 50 fastest-growing cities in Iowa.

Video Vault
We've opened up our video vault and dusted off our Coralville history videos from the past two decades. Enjoy!

History of the Coralville Fire Department
Original air date: May 9, 2019

Coralville historian Rex Brandstatter talks about some of the restaurants that were a part of Coralville's history. Play Restaurants of Yesteryear video

Coralville historian Rex Brandstatter tells a story that dates back to 1871 about Coralville's history. Play The Case of Old Town Hall video

Near the Iowa River Power Company Restaurant in Coralville, 19th century entrepreneurs constructed a series of mills which bore witness to the creation of early Iowa's political system, a horrific industrial accident, and the beginnings of Iowa's electrical system. Bill Whittaker, Office of the State Archaeologist, discussed the history of the water-powered mills, and businesses that relied on the Iowa River and the dam in Coralville. Play Historic Coralville Mills video

A class of Coralville Central fifth graders spent a day in Coralville's 1876 schoolhouse and learned like students in the past. This day was made possible by Coralville Central Elementary School and the Johnson County Historical Society. Play A Day in the One Room School video